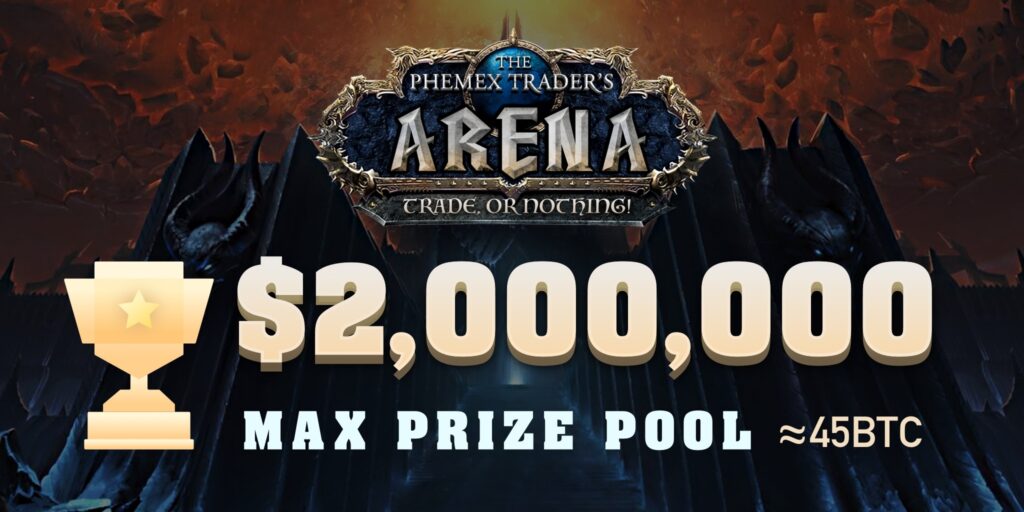 This season comes with one more opportunity – a crypto trading competition. Win new funds from trading Bitcoin and expand your cryptocurrency parabolic before they go parabolic.

For that, you have Phemex Trader’s Arena – a unique ‘team battle royal’ for traders in which everyone can compete and win based on how much return on investment they can get in a specific time frame.

There are 45 BTC at stake for the best of +18,000 traders that are willing to participate in a contest of trading on the Phemex platform.

They must have a BTC account with a net value of at least 0.005 Bitcoin at the time of registration and apply to compete in the contest.

This event is a team crypto trading competition; therefore, after registration, the participants need to choose a team they want to be part of during the competition. This is not just a random task, as applicants cannot change their team once they decided.

The best approach to finding a suitable team is to ask around inside crypto communities and find acquaintances to invite in.

Team members that know each other will work better and harder together. And with enough good hard work, a team can reach the top of the leaderboard.

How to get in?

It’s easy. As mentioned above, a trader only needs to have a BTC account with a net value of at least 0.005 Bitcoin at the time of registration and apply until March 23. The competition starts on March 24.

If the net value goes under 0.005 BTC before the competition starts, that’s not a problem. Traders in this situation can still participate as the initial net value will still be calculated as the net value from the time of registration.

As for teams, they have to be of at least ten members. If the competition starts and the group doesn’t reach the minimum amount of members, the team will be disbanded.

The disbanded team’s participants will still take part in the competition, but they will be assigned automatically to other teams.

Once the competition starts, teams have until April 6 to rank as high as possible, based on their members’ returns.

What are the prizes?

There is a $2,000,000 prize pool available when the number of participants reaches 18,000. This money will be used to reward the best teams and the best players according to their individual efforts and team efforts.

At the moment, over 3319 people joined the Phemex Trader’s Arena, putting the prize pool at 3 BTC.

78% of the prize pool will be allocated for the team rewards, and the remaining 22% will go to the best individual traders.

The team awards are allocated for the best ten groups of participants, ranked by their returns.

The 22% allocated for the individual awards will be received by the top 10 individual traders as well. They are the traders with the best returns in all teams.

As we can see, there is a reward for doing the heavy lifting and being a team player.

How is Phemex organizing Trader’s Arena?

First things first, Phemex is bigger than you would think. It is the fastest cryptocurrency exchange and futures trading platform being able to provide 1 Ms order response times and over 300k executed orders per second.

In terms of liquidity, the platform integrates more than 30 liquidity providers and has an average daily trading volume of $574,000,000.

Not to mention, Jack Tao and other founding members are previous professional Wall Street traders and investors that built Phemex emphasizing professionalism, trustworthiness, and customer support.

Also, this is not the first edition of Phemex Trader’s Arena. They organized this event last autumn, and the traders were ecstatic to participate.

By continuing to use the site, you agree to the use of cookies. more information